The decision minefield of choosing an iPod

I’ve been without an MP3 player for a while now, and while I can’t say I miss it that much, it would be nice to have something to start storing my music on and maybe some video. I don’t really agree with walking round with music blasting in your ears all the time, but it would be handy for train journeys and travel. Inevitably I’d probably go for an iPod, but looking at the range available, it’s a tricky choice to make on selecting the most suitable product.

The new iPod Touch 32Gb is an attractive step up in their Touch range. The 8Gb and 16Gb versions have never offered enough memory, especially as the Touch is designed not only for storing music but photos and video too. The apps were also a bit naff compared to what its big brother—the iPhone—could offer. But now as well as the memory increase, Apple have done the right thing and included improved and increased apps for the Touch. But at £329 for the 32Gb version, that’s a lot of money; you could get a iPhone for £269.

iPod nano is too small in memory and to be honest, a bit too cutesy and girl-orientated for my tastes.

So the iPod Classic is surely the winning contender. At 80Gb it has ample space for music, video and photos. So what’s the problem? Well, the thing about the Classic is that it now all looks rather dated compared to other Apple products such as the Touch and iPhone. It uses a bulky hard drive instead of Flash memory, has a small screen size and uses the famous jog wheel which by today’s standards already seems retro. Let’s face it, touch-screen interfaces are the future along with bigger screens for video and internet and of course wi-fi.

Ideally, my iPod of choice would be an 80Gb Touch (at a reasonable price), which by the rate at which Apple are releasing new products, might come sooner than expected.

I love Sleeveface. Great example of a user-driven site; a simple idea which is then generated and moulded by ‘the people’. It’s then spread via social networking sites as Flickr, Facebook and YouTube (and eventually finds its way into mainstream media).

I couldn’t resisted having a go with this picture of Elvis. 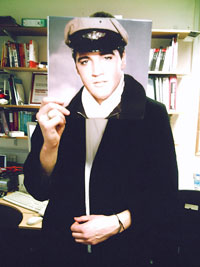 Stephen Fry was talking about something interesting the other day on his enjoyable technology blog he writes for the Guardian. It was all about the Asus EEE PC, a small ‘portable’ laptop that uses a simple 4Gb Flash hard drive and Linux software amongst other things. Anyway, this basically means that this laptop is robust and has no vunerable moving parts but has no CD drive and can just perform the most basic of functions (wi-fi internet, simple apps). The EEE is also cheap at around £200.

I was thinking how this bit of kit could be useful:

1. Schools/Colleges
Where, instead of the traditional IT suites and computer centres, the students are each issued with something like the EEE which they then use for study and internet access via the central wi-fi in the building. No more costly IT maintenance and system updating or using limited-supply computers.

2. Travel/Backpackers
There’s an increasing market for travel orientated technology. Whether it be gap year students or backpackers, everyone depends on email communication back home as well as logging their adventures on a blog or similar. There’s also the need for digital photo management. A bigger issue is money management and fear of identity theft. Online banking is ideal for travellers but having a personal, truely portable computer with them for this purpose is the safest way to avoid scams in dodgy internet cafes.

It would be good to know what other people think of hardware like the EEE and the Linux operating system (ie. people with more technical knowledge than me!)

Update (11/02/08) – Looks like thoughts are being put into action from the sound of this news item.

Technology in the developing world – running before walking?

The politics of distributing the ‘$100 laptop’ to developing countries still continues to cause problems. But my sister reports from her teaching advisor post in Rwanda that basic education might be improved in some African regions with technology as simple as a pen being provided for all.

I’ve never really been into video blogs or incorporating video into a blog post but perhaps that was because I never had the means to capture anything on film. My new Nokia 6300 might allow me to do so in the future.

A collegue from IT systems has been experimenting with video blogging recently and I like the idea that it can give a deeper insight into your world and what you are trying to say.

I found this article—again, about the MacBook Air—quite good fun. Here, a (video) picture speaks louder than words.

Just a thought – are all Mac users this sad?

It’s good to see an international institution like Lego moving with the times, even though the old plastic brick is celebrating it’s 50th anniversary this year. Their excellent website displays a huge range of products for children of all ages. The Mindstorm range makes innovative use of modern technology (there was a promotional stand at BETT) – you can build a robot, program it with computer software and then control it with USB or Bluetooth technology.

Lego Factory lets you design, build and then buy your own creations. Using the nifty downloadable Digital Designer, you can create designs easily by dragging and dropping bricks and components together. Your creation can be uploaded to a gallery and then ordered from Lego, calucating the cost from the amount of bricks used.